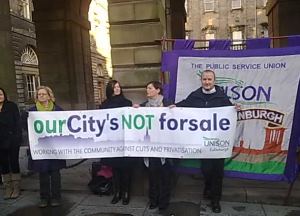 The union has produced a briefing for councillors urging them to look at new ways of generating income in light of central government cuts and to consider a ‘living wage’ to protect the lowest paid workers.

John Stevenson, UNISON Edinburgh Branch President, said: “We know from the economists who actually predicted the crash that cuts like these are not needed and they are likely to damage the economy further. The UK Government cut £6 billion from public services in June and now we hear bankers are to give themselves the same £6 billion in bonuses this year. Surely something is sadly wrong when public services and public service workers have to pay for the folly of the financial sector.

“But we also know that the council has to face the reality of the UK Coalition’s cuts and the Scottish Government’s budget settlement. That makes it all the more important that the Council does all in its power to stand up for Edinburgh’s jobs and services now so that there will still be an infrastructure there to build on in the future.”

Kevin Duguid, Branch Lead Negotiator said: “At times like these every penny counts. That is why we are calling on the Council to end its wasteful privatisation plans. This would save money on legal advice and consultants and free up managers and staff to get on with the job of providing services. All of the in-house service improvement models have shown that they will deliver significant savings, so why throw good money after bad by continuing down the privatisation road?”

Agnes Petkevicius, Branch Secretary, highlighted the human cost of cuts: “Council services are relied on by the elderly; disabled people; children: Essential services delivered directly by people like home carers, social care workers, classroom assistants, nursery nurses. Often the lowest paid and least valued. Services like roads, public safety, cleansing are relied on by everyone in Edinburgh – jobs delivered for Edinburgh people by Edinburgh people. People who put around 70p of every pound they earn back into the local economy.

“Despite council claims that front-line services will be protected, each and every one of these services is facing cuts. We need to bust the myth about front and back office jobs – they are all part of the team delivering essential services.”

Calling for the council to avoid compulsory redundancies, Kevin Duguid said, “Unions will work with the Council but that is hard for workers to do when they could be forced on to the dole. Many are toiling to cover for the hundreds of jobs already lost without also being faced with the sack. A Council this size should be able to manage any job losses on a voluntary basis”.