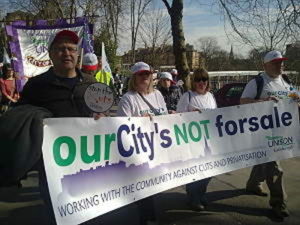 Edinburgh joined thousands from across Scotland in Glasgow rally against cuts in public services.

The bright sunshine was compensation for the 08.00 start on the bus from Edinburgh to join thousands of UNISON members, service users and community groups marching through Glasgow’s West End to say ‘Stop the Cuts’ and ‘Public Works’ as the next stage in the campaign against public service cuts.

UNISON’s Scottish Convenor, Mike Kirby said: “As politicians vie with one another to out trump each other’s cuts to pay for the bail out of the banks, we urge our members and community campaigns to join UNISON’s Public Works campaign and tell politicians at all levels – in Westminster, in Holyrood and locally, that you will not accept cuts in our vital public services to bail out the fat cats.”

UNISON UK President, Gerry Gallagher brought greetings to the marchers from a similar rally in London. He said, “In Glasgow and in London today our key message is that public services should not suffer because of the bank bailout. Our members didn’t cause the crash, and neither did the people we serve every day in communities across Scotland.

“Cuts will damage recovery from recession; Cuts will hit public services we all depend on; Cuts will threaten the wellbeing of our members and their families. You all have your own story to tell. And tell them you should. Because it is the combined voice of public service workers and service users that need to be heard in corridors of power.”