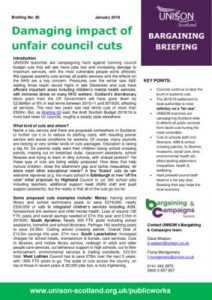 UNISON branches are campaigning hard against looming council budget cuts that will see more jobs lost and increasing damage to important services, with the most vulnerable people worst affected.  We oppose austerity cuts across all public services and the effects on the NHS are a key concern. Pressures over the winter saw A&E waiting times reach record highs in late December and cuts have affected important areas including children’s mental health services, with immense stress on many NHS workers. Scotland’s discretionary block grant from the UK Government will have gone down by £2.6billion or 8% in real terms between 2010/11 and 2019/20, affecting all services. The next two years see real terms cuts of more than £500m. But, as Briefing 93 said, the draft Scottish Budget 2018/19 is more bad news for councils, roughly a steady state elsewhere.

Ministers should look urgently at the harsh and damaging impact of spending reductions being proposed in every community and should offer a significant increase to councils. This must include sufficient to pay local government workers the increase they deserve after years of effective pay cuts.

SEE ALSO PUBLIC WORKS BLOG Council funding – a step forward, but not out of the woods