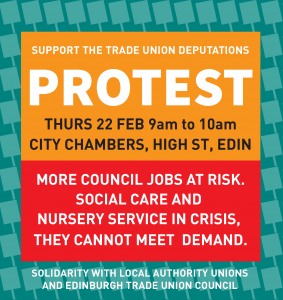 Lobby against the silent slaughter of council services. Despite the spin, the truth is that council services are being cut again this year on top of the £250 million already cut.

30,000 jobs have been lost in local government across Scotland in recent years.

In any other industry that would bring political calls for a rescue package. Instead, all to often there is silence as services are slaughtered and workloads increase as staff are asked to deliver the impossible.

The Scottish government has passed austerity on to councils. It is a political choice with nine out of 10 austerity job cuts in Scotland coming from local government.

These jobs are people. It is people that provide council services like cleansing, home care, public safety, roads, trading standards, child protection, residential homes and much much more.

The cuts also affect workers in the voluntary sector who provide services for the public.

In fact the cuts affect everyone in Edinburgh. The vicious circle of cuts, less money in the economy and less tax coming in leads to even more cuts.

Everyone is worse off. Council workers, the people that rely on services and local businesses.

UNISON represents the people who deliver our services. Join us now to tell the council that we support Edinburgh’s services and we want them to do the same!

Edinburgh TUC has published a budget briefing, see it here