Impact of Austerity in Scotland 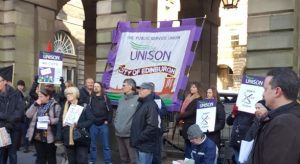 Some 30,000 council jobs have gone in this period – nine out of 10 jobs lost across the public sector in Scotland have been in Local Authorities’

Councils have responded to austerity by a combination of increased local taxation, increased regressive service charges (up by 13%), and workforce and service cuts.

Audit Scotland, not the best friend when it comes to highlighting the funding crisis in local Government are now themselves using the phrase “financial stress” – perhaps their lightbulb moment?

The capital coalition motion highlights that “This is the eighth successive year of real-terms reductions in grant funding… “, however all of the blame appears to be put on Westminster, the Scottish government has hardly been a friend of local government when allocating local authority funding.

We have already lost £250million from the budget over the past five years and with another potential cut of £150 million over the coming five years we really are witnessing the silent slaughter of local government.

We welcome the extra £12.4 million allocated, but don’t give the impression that this makes everything rosy in the garden by highlighting that extra money is being given to services, there are still to be significant cuts and reductions in jobs and services these are highlighted throughout the papers in front of you.

Will the extra £4million to carry out essential needs assessments turn out to be nothing more than a token gesture? Will it do no more than increase unmet need figure?

One local authority having a backlog of 1800 needs assessment should be frontpage news, could you imagine if there was 1800 people sitting in the waiting room of the royal infirmary, there would be a caravan of press camped outside.

We currently have over 7000 hours of unmet Health and Social care need here in Edinburgh, again a scandal, real people needing cared for and cast aside, left lonely and neglected by a system that claims it is austerity that is needed? To facilitate the care needs you would need around 200 fulltime staff, therefore we have 200 people less than is needed, it is also a clear reminder that in local government it is people, not machines that deliver services.

We are pleased to read that the Coalition recognises that the council’s employees are at the heart of successful service delivery and values the work that they do every day for the citizens of Edinburgh and acknowledges that the real incomes have suffered in recent years.

It is only right therefore that this year’s pay settlement must protect workers from the sharp rise in inflation, start to reverse the many years of real terms cuts to wages through pay restoration, and protect the lowest paid.

The trade unions are clear that this year’s pay settlement must protect workers from the sharp rise in inflation. The SJC Trade unions are seeking a 6.5% increase for all or £1,500 flat rate whichever is greater.  This is based on an above inflation increase plus an element of restoration.

In summary, all new money is welcome and makes a contribution to the draft budget shortfall. However, it still means an underfunded pay policy and cuts to local services.

The silent slaughter of local government continues and today you will pass on even greater misery to the people you represent, and the staff that you employ.

Our people, your staff, provide the services to the most vulnerable and disadvantaged peoples in the most deprived areas of Edinburgh. One of the most beautiful cities in the world yet we have a great scar running through it. An ever-increasing social divide and deprivation on a huge scale, 25% of our young people living in poverty, 7000 hours of unmet social care need, and a massive back log of assessment of needs.

The joint Trade Unions in the City of Edinburgh Council are strong, and united, in our opposition to the austerity agenda and continue to challenge the negative impact of the cuts.

Union representatives have made and will continue to make deputations to council committees, including full council meetings, highlighting the risks associated with cuts. Unfortunately, these tend to fall on deaf ears, thus showing a complete disregard for your staff.

You have a statutory duty to set a legal budget, you also have a duty to provide statutory services, while struggling to do this, you also need to be sure that you are not neglecting your statutory Duty of Care to your staff. The trade unions will use every resource at our disposal to ensure that our members are treated with dignity and respect and all forms of harassment or bullying will be challenged.

I have heard elected members say ‘our hands are tied’; this month we celebrate the 100-year anniversary of Women being given the right to vote. Those brave women and some men had the whole system of the law and the establishment against them, imprisoned, force fed, demonised, but victorious in their aims. That’s a real example of people’s hands being tied – no one in here has their hands tied, just a lack of principle when it comes to defying injustice.

At the Finance and Resources committee held on the 7 November 2017 a conservative councillor asked what an unmet need was? shocking in itself, but when he was informed he replied something to the effect ‘so you are looking for a blank check’? This shows the ideological loathing that the conservatives have towards public services and the most vulnerable and needy in our society.

The Conservative and Lib/Dem councilors supported and fought for the maintaining of the music school – the trade unions would like to see all communities in our City having access to music schools.

We have grave concerns that the same councilors will have a lot less interest in the potential cuts in other service areas, including early years and health and social care.

2018 is the Year of Young People, leading up to this Edinburgh and other local authorities have done nothing but cut the services and opportunities that young people need to have access too.

Of even greater concern was the conservative leader’s comments at the Finance and Resources committee held the 27 November 2017 where he was implying how stretched the top 10% already are.

Perhaps he could have a word with his other colleagues in the conservative party, not those just in the top 10%, but those in the top 1%, such as the likes of Lord Ashcroft and ask them if they would start paying their income tax instead of hiding their massive fortunes in tax havens.

He may also want to put pressure on the Prime Minister and the Chancellor of the Exchequer and encourage them to move away from Austerity and invest in the country’s infrastructure and public services.

The SNP group need to put pressure on the Scottish Government, and the Cabinet Secretary for Finance and Constitution, to move away from their historical position of applying huge cuts to local government.

The Scottish government is slowly squeezing the last breath of life from local government. They appear to have very little regard for our responsibilities to deliver services – services provided from the Cradle to the Grave.

We demand that the progressive parties on the council stand up for and fight to protect jobs and services, not act as mere administrators of austerity.

The council as an employer must take its statutory duty of care to its employees more seriously, your staff are demoralised, under resourced and at breaking point. They are being asked to take on more and more with less and less, resulting in detrimental impacts to their health and wellbeing.

If shaped by austerity Transformation programs do not work. Transformation in this context is no more than cost cutting, reduction of services, which have a negative impact on the terms and conditions of the staff who provide them.

“It is untenable for the Scottish Government to starve local authorities of funding when it has received a £188m cash increase in its budget from Westminster.

This council has already cut 1000 jobs, with the consequence that a great deal of invaluable experience and skill has been lost with the remaining staff having to take on more and more. This has a very negative impact on the capacity to provide meaningful services to the most vulnerable and disadvantaged peoples of our city.nine

As a consequence, dedicated public servants are showing greater levels of stress and anxiety. One of the biggest causes of absence is attributed to mental health issues.

Staff are feeling unsupported and demoralised, and their stress is a reflection of the impact of cuts to services to the most vulnerable in our city. Staff want to support those in need, but too often find themselves without the time or resources to meet that need.

“The key to the future of local government lies with the dedicated staff who provide the services to our communities.  This must be recognised and staff properly rewarded through this pay round and in the future in redressing the balance of earnings against the cost of living.”

‘We will defend our jobs and services. If you are prepared to do the same we will stand fully with you’