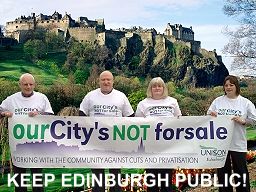 UNISON Scotland has welcomed the decision by Edinburgh City Council to support in-house bids for vital city services instead of privatising them.

The full council voted today for a joint Labour-SNP amendment with Green Party backing which overturned a proposal by the ruling Lib Dem led coalition to award a contract for Integrated Facilities Management to private bidder Mitie.

UNISON branch President John Stevenson said: “This is the best outcome we could have got – following the victory in November for keeping Environmental Services public, and the recent abandonment of the ruling group’s plans to privatise Corporate and Transactional Services. John Stevenson told the full Council meeting this morning:

“Secondly because we believe that the public sector comparators – the in-house options – have risen to the challenge and will deliver not only best value but a continuing commitment to public services in Edinburgh.

“And thirdly because we believe that it is right that the Council should show trust, confidence and respect in its own workforce.”

“The unions and Council employees have put enormous work into this process. We have shown in detail that the in-house options have been realistic, fair and efficient – but most of all workable – especially if we have a level playing field and like is compared with like.”

UNISON’s Peter Hunter added; “This is the the death of Scotland’s largest council privatisation proposal ever which, given the NHS position, begs the question whether the door is permanently closed on future privatisation plans across the public sector as a whole?”