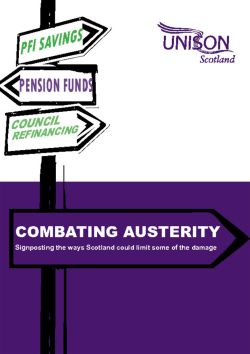 UNISON Scotland has launched calling on the Scottish Government, local authorities and public bodies to do all they can to mitigate UK government austerity.

The public services trade union is calling for a range of financial and industrial policies to create investment in Scottish infrastructure, green energy production and jobs.

With interest rates at an all time low, it is cheaper to buy out or refinance PPP / PFI contracts saving up to £12bn; pension funds could be a source of badly needed investment for infrastructure, we need a political consensus on reform of local taxation; and councils should collaborate in using bonds as a means of financing borrowing rather than routinely using the Public Works Loan Board.

See the press release and the full report on the UNISON Scotland site at http://www.unison-scotland.org.uk/news/2015/sepoct/0923.htm