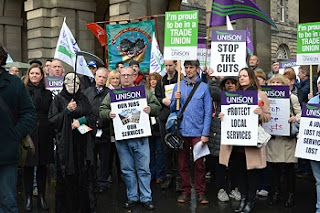 Hundreds of union members and members of community groups turned out this morning to tell Edinburgh councillors to stand up for local services. Branch president John Stevenson told the rally: “If compulsory redundancies come, against the council’s own pledge, it is of the councillors’ own making. They are cutting too fast and they don’t have to.”

He also called for fairer funding for local services: “10,000 council workers require protection of vulnerable groups (PVG) clearance to do their jobs. That’s how many provide direct services to children and vulnerable adults. That’s what we are talking about when we are talking redundancies. It is time for the Scottish government to fund councils properly.

UNISON has a deputation in the council meeting. See the meeting online at http://www.edinburgh.public-i.tv/core/portal/webcast_interactive/175749

Amanda Kerr, UNISON Edinburgh branch secretary, told councillors:  “Five weeks ago the committee deferred making a decision on the dropping of their pledge until there was more clarity and a clear and evidenced need for them to do so. That clarity is still not there.”

“We are told that voluntary redundancy and are unlikely to achieve the required numbers. We weren’t aware the chief executive had a crystal ball but if he does he could maybe lend it around the staff so they can find out if they will have a job or not!”
UNISON and council staff still don’t know where the redundancies are to come from as they still have not seen any structures. “With so little detail is it any wonder staff are not coming forward?”, asked Amanda.
“The development of organisational reviews and the processes for staff applying for severance will all take time. The speeding up of these processes will not work and it is inevitable that in doing so mistakes will be made.”
Amanda also warned about pressures on staff left behind and the vacuum left by a lack of managers: “What will happen to the staff and services left behind?  With 27% of managers going who will manage these processes and support staff through them?”, she said.

Staff Side Secretary Tom Connolly thanked the politicans who had engaged with the unions but slammed the pace of change as ‘too fast’. The lack of information and meaningful consutation was making staff feel more vulnerable.

Tom criticised the lack of proper equlity impact assessments especially when the majority of affected staff are female and many service users are disabled. “The most vulnerable are suffering from the austerity myth”, he said.

Tom stressed the need for proper political control. Tom slammed the issueing of the formal redundancy notice by officials without pre-warning to the unions or the politicians.

Tom said the council needed a medium and long terms strategy to protect jobs and services. In the immediate future the council needed to mitigate the effects of austerity and redundancies by making the most of low interest rates to re-finance PFI contracts and in the long terms it needed to look at how it manages the financial burder of debt.

“The impact on jobs equates to a negative impact on services and on the constituents you represent”, he told councillors.

Tom warned of industrial action in the event of compuslory redundancies. From now on the unions’ expectation would be: “To slow the pace of cuts, ensure meaningful consultation and full elected member oversight.”