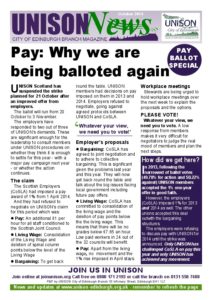 Why we are being balloted again. PLEASE VOTE! New branch briefing on employer’s proposals. Hold workplace meetings now. Click here for the briefing.

UNISON Scotland has suspended the strike planned for 21 October after an improved offer from employers. The ballot will run from 20 October to 3 November.

The employers have responded to two out of three of UNISON’s demands. These are significant enough for the leadership to consult members under UNISON procedures on whether they think it is enough to settle for this year – with a major pay campaign next year – or whether the action continues.

The Scottish Employers (CoSLA) had imposed a pay award of 1% from 1 April 2014. And they had refused to negotiate on UNISON’s claim for this period which was:

Pay: An additional £1 per hour for all staff conditioned to the Scottish Joint Council.

Bargaining: To get back round the table. UNISON members had decisions on pay imposed on them in 2013 and 2014. Employers refused to negotiate, going against agreed protocols between UNISON and CoSLA.

Bargaining: CoSLA has agreed to joint negotiation and to adhere to collective bargaining. This is significant given the problems last year and this year. They will now get back round the table and talk about the big issues facing local government including future pay offers.

Living Wage: CoSLA has committed to consolidation of the living wage and the deletion of pay points below the the living wage. This means that there will be no grades below £7.65 an hour. Low paid workers in 24 out of the 32 councils will benefit.

Pay: Apart from the living wage, no movement and the 1% rise imposed in April stays.
Workplace meetings

Stewards are being urged to hold workplace meetings over the next week to explain the proposals and the options.

PLEASE VOTE!
Whatever your view, we need you to vote. A low response from members makes it very difficult for negotiators to judge the real mood of members and plan the next steps.

However, the employers (CoSLA) imposed 1% for 2013 and 2014 as well. The other unions accepted this deal outwith the bargaining structures.

The employers were refusing to discuss pay with UNISON for 2014 until the strike was announced. Only UNISON has challenged CoSLA on pay this year and only UNISON has achieved any movement.