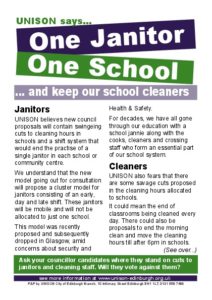 UNISON believes new council proposals will contain swingeing cuts to cleaning hours in schools and a shift system that would end the practise of a single janitor in each school or community centre.

We understand that the new model going out for consultation will propose a cluster model for janitors consisting of an early, day and late shift. These janitors will be mobile and will not be allocated to just one school.

This model was recently proposed and subsequently dropped in Glasgow, amid concerns about security and Health & Safety.

For decades, we have all gone through our education with a school jannie along with the cooks, cleaners and crossing staff who form an essential part of our school system.

UNISON also fears that there are some savage cuts proposed in the cleaning hours allocated to schools.

It could mean the end of classrooms being cleaned every day. There could also be proposals to end the morning clean and move the cleaning hours till after 6pm in schools.

EU guidance on preventing the Norovirus recommends a good cleaning regime to control its spread.

Putting aside all the practical issues, these staff are predominately women on the lowest pay in the council, around £6,000 a year due to part time work and 38 week contracts.

The morning and early evening cleans provide essential local employment with most of that pay being spent locally, back into the economy.

This will force staff to move to evening work four nights a week, travel to different schools for two or three hours work or if they can’t change hours, face voluntary redundancy, or being declared surplus with little prospect of finding similar work.

Unfortunately, a UNISON survey found that many cleaning staff do not have an occupational pension or if they do, it would pay out very little in the way of a pension.

Once these jobs are lost from our communities they will be gone for good and the lowest paid council staff will end up losing the most.

Gerry Stovin, UNISON Edinburgh service conditions officer says “UNISON will be highlighting this issue in the run up to the council elections, so if you meet a candidate ask them what they think should happen to the school jannies and cleaners and tell them how much they mean to the school.”