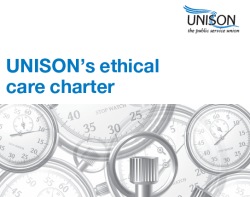 A UNISON seminar of members working in social care and home care has called for dignity for service users and dignity for the staff who serve them.

The call came 24 hours before UNISON warned that the home care system is in crisis following a Care Quality Commission Report into homecare services in England which found that as many as a quarter are failing to meet quality and safety standards.

Members from across the UK attending the seminar in Birmingham on 12 February heard harrowing stories of service users condemned to brief 15 minute visits to provide care, Alzheimer’s sufferers subjected to regular changes of carer and welfare cuts taking away the independence of disabled people.

They heard of the widespread exploitation of outsourced home care workers on zero hours contracts, paid on or less than the minimum wage, not paid or reimbursed for travelling between service users and having to do the job with precious little training.

There were first-hand personal stories, not least from Graeme Ellis of UNISON’s National Disabled Members’ Committee who told of the human cost to himself of cuts in budgets and the vicious attacks on welfare benefits. Attacks like changes to Disability Living Allowance will have life-changing effects on disabled people and the savage ‘bedroom tax’ will throw many people into deeper poverty, family breakdown or homelessness.

But it was not all despair. Activists told how they were recruiting, organising and fighting back. Sharing campaign strategies and lessons was a major part of the seminar with workshops on issues like UNISON’s Ethical Care Campaign, Health and Social Care Integration, Cuts in Children’s Services, Organising in the Voluntary Sector, Residential Care Conditions and Practising Radical Social Work.

The term ‘dignity’ was one brought up across the groups. UNISON’s Ethical Care Charter demands that the time allocated to visits has to match the needs of the clients. “In general, 15-minute visits will not be used as they undermine the dignity of the clients”, it says.

Calling on all councils to sign up to the charter, UNISON lays out three stages in the programme. The immediate principles are that services should match need, home carers will be given adequate time to meet that need, home care workers should be paid for travel and given enough time to get from one service user to the other. They should also get sick pay if they are off.

Doesn’t sound like too much to ask, does it? The modesty of the demands shows just how bad things are in this sector.

Stage 2 of the charter calls for continuity of staff for service users, no zero-hour contracts, systems to support staff raising issues about service users’ needs and regular training. Stage 3 calls for the Living Wage to be paid and a proper sick pay scheme “to ensure that staff do not feel pressurised to work when they are ill in order to protect the welfare of their vulnerable clients.

The charter has been sent out to branches who should be using it to engage with councils on improving the service.

Helga Pile, UNISON national officer for homecare, said: “…despite Government cuts, councils cannot wash their hands of their responsibilities. It is time for councils who commission or provide these services, to take responsibility for the welfare of those who receive them and for the workers who deliver them. They must do far, far better than they are now.

“Unscrupulous private financiers should not be allowed to cream millions out of an underfunded system, whilst providing seriously substandard care. In some cases this has had appalling consequences.”

Colin Turbett’s workshops on Practising Radical Social Work also tackled the issue of dignity and respect. Calling for the values of respect, building positive relationships and advocating for service users, Colin warned against the oppressive practice and attitudes deriving from ‘managerialism’ and an over-structural approach to social work practice.

This was not about rampant revolutionary action, but about client-centred practice and about recognising issues of poverty and class in anti-discriminatory practice. It was also about honesty and not avoiding the hard decisions.

A culture change was possible, said Colin, as he promoted a manifesto for radical practice that included an emphasis on “security, dignity and resilience building rather than surveillance of risk”.

The manifesto calls on social workers to focus on empowerment and capacity building, agreeing goals, recognising power imbalances. They should seek opportunities for ‘small scale resistance’ but also use collective opportunities to campaign for social justice. Really, it was about practising ethically. It was about good practice as we used to know it.

Colin, from UNISON’s North Ayrshire Branch and a member of the UNISON Scotland Social Work Issues Group, has written a book on the subject to be published soon.