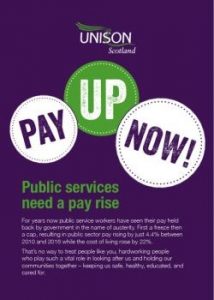 The trade unions are clear that this year’s pay settlement must protect workers from the sharp rise in inflation (the OBR is forecasting RPI inflation this year of 3.3.%),  start to reverse the many years of real terms cuts to wages through pay restoration, and protect the lowest paid.

Trade unions have asked for a £1,500 flat rate increase to all, or 6.5%, whichever is greater.  This is based on an above inflation increase plus an element of restoration.

The detailed points of the pay claim are: