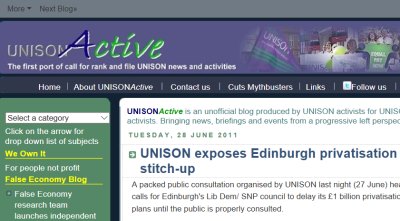 150 Edinburgh people, service users, community groups and employees attended the meeting called by UNISON’s Edinburgh Branch after the council had failed to mount any public consultation.

UNISON Branch President John Stevenson who chaired the meeting said: “The fact that people were hungry for information on the privatisation plans shows just how much they have been kept in the dark about the scale of the sell-off and the dark side of the tendering process. The council must now delay a decision and come clean with the people of Edinburgh on the enormity of plans that will affect every service across the council and every citizen.

“People were astonished at some of the details of the bidding processes and the failure of the council to meet some legal obligations, especially after the trams fiasco”, he added.

“It was disappointing that the ruling Lib Dem and SNP councillors failed to take up our invitation to explain why they were pushing through these plans affecting all of our services and 4,000 jobs that deliver them, while the public remained in the dark”, said Mr Stevenson.

The union has now pledged to hold ‘meeting after meeting’ until the administration ‘faces up’ to the people of Edinburgh.

Kevin Duguid, UNISON lead negotiator said, “The Lib Dems and the SNP both opposed privatisation when they were seeking your vote. It is astonishing that they are now silent on breaking that pledge and pushing through the biggest council privatisation ever seen in Scotland”.

The preferred bidder for two major contracts will be announced on 25 August. The privatisation is being pursued through a “competitive dialogue” – similar to competitive tendering but with slightly greater reference to service quality.

Each of the three privatisation projects is being shadowed by an inhouse option and all the service options – public and private – will be evaluated in time for a reports to full council in August and December.

However, the worry is that politicians have got themselves so out of their depth that they will be scared of going for the in-house option.

Lead negotiator Kevin Duguid outlines the UNISON position. “We continue to put the bidders and the process under the microscope and have recently put a set of questions to bidders about workforce issues which we will publish online.”

Early in the campaign the Branch pointed out that the council report recommending the privatisation was a stitch up. It used completely different types of councils to Edinburgh as comparisons.

Four of the original bidders had been fined for illegal price rigging in public contracts and one of the companies was linked to the illegal occupation of Palestinian territories by the Israeli state.

Fatal accident convictions were concealed , despite bidders being given the chance to ‘come clean’.

Some of this information had been concealed from elected members so UNISON successfully lobbied for a scrutiny system whereby senior councillors from each party get unrestricted access to shadowy truth about privatisation.
The ‘Our City’s Not For Sale’ campaign continues and has included briefings, an information pack for councillors, expert analysis of the process, leaflets, demos and street leafletting by members in the city centre.