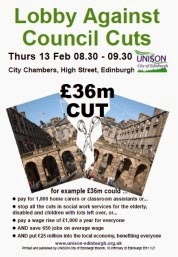 UNISON, the union representing most Edinburgh Council workers, will lobby the council budget meeting on Thursday 13 February from 08.30 to 09.30 to expose the effects of austerity cuts on jobs and services.

“Edinburgh Council plans to put through £36 million in cuts. This is on top of £90 million since 2011, and £175 million since 2007. Services just cannot survive with this kind of attack year on year”, said John Stevenson, the union’s Edinburgh Branch President.

“We know the cuts are driven by Westminster. We know that Holyrood has just passed these cuts on, singling out local government for the lion’s share. But we want to hear our politicians standing up for our local services, not just passing the cuts on.

“We see in the south of England what the effects of failing to invest in public services, like flood prevention, can be. Services are about people, they are relied on by people and they are delivered by people who have seen their spending power slashed and workloads raised to breaking point”.

UNISON’s Tom Connolly, staff side secretary for the joint trade unions, says these cuts will mean…
• Elderly and disabled people paying more for care
• Services for people with physical disabilities facing funding cuts and reduced staffing
• People with learning disabilities being forced to pay for the support they need to live independently
• Class sizes rising and some head teachers and classroom assistants losing their jobs

And for the staff who still have jobs, it means….
• Workers expected to deliver more and more with less people and less resources
• Cuts disguised as front line staff are working at breaking point to deliver more for less
• More and more people crammed into fewer buildings affecting morale and health and safety
• Chaotic reorganisations ignoring staff knowledge and skills and service to the public
• Cuts to conditions and a pay freeze that means workers’ spending power has dropped by 16%

“All this when local people and local businesses need investment in public services to boost the local economy for everyone.”

UNISON is urging the Council to publish a budget that shows how services for the people of Edinburgh could be saved if it were not for government cuts.

As UNISON General Secretary Dave Prentis said: “No school cleaner gambled billions on the stock exchange – No home carer, no social worker, no librarian. None of them created this recession. Why should they be expected to pay for it?”

See the unions’ staff side response to the budget at http://www.unison-edinburgh.org.uk/response/budget2014.html