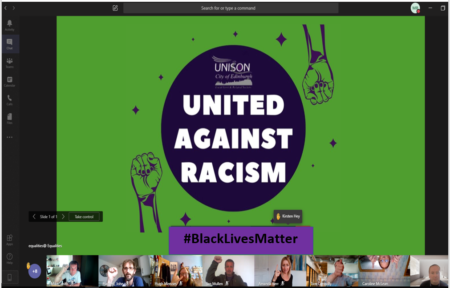 UNISON branch officers took some time during their weekly call to remember George Floyd. George was an unarmed black man killed by police officers in Minnesota on May 25th. Mobile phone footage of the incident shows two officers pinning George to the ground whilst another presses his knee onto George’s neck for almost nine minutes.

At the start of the video, George can be heard telling officers that he can’t breathe and several people at the scene plead with officers to check for a pulse as George becomes quieter. By the time medical help arrives George is motionless and pronounced dead an hour later.

Following widespread protests in the US and around the world, the officers involved now face criminal charges including second-degree murder. As trade union activists, we oppose racism and discrimination in all forms and stand in solidarity with Black people across the world. #BlackLivesMatter