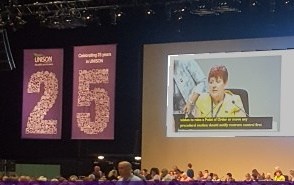 As UNISON celebrates its 25th year, the branch played a full part at National Local Government Conference and the union’s parliament, the National Delegate Conference in June (See below for reports on our branch speakers on the UNISON Scotland website).

Unfortunately our motion on Work Related Stress and Mental Health Wellbeing just missed being heard, although Conference had prioritised it for Friday afternoon. To be fair, it was preceded by important debates on Grenfell, the Windrush issue and Universal Credit which affects so many of our members – and which saw many moving speeches.

On the plus side, four of the delegation spoke, three of them for the first time at Conference. The delegation was Caroline Mclean, Lorraine Needham, Jane Watson, Tom Howorth, Heather Innes, Tara McArthy and John Stevenson was a late replacement for Tom Connolly.

Tackling the crisis in health and social care

As the NHS gets ready to celebrate its 70th birthday on 7th July, conference slammed cuts to NHS funding since 2010 by successive UK governments. It backed an NEC motion which set out a range of actions to address the crisis in Health and Social Care, including a continuing campaign against privatisation in the NHS and for the delivery of social care by the public sector, universal and free at point of need.

Lorraine Needham, Edinburgh social care worker and first time speaker, highlighted the nature of the workforce in home care, as predominately female many in their 50s and 60s and suffering from health issues including osteoarthritis, (wear and tear) and muscular pain.

She explained, “In February this year, we had a red weather warning in Scotland, and our carers walked to work in knee deep snow to their service users, then we learned on the news NHS staff were getting the army to take them to work and back.”

“We questioned this to be told by our organisers and co-ordinators we are not essential workers. This upset us and angered the staff we are essential in the community and we deliver a vital service to the elderly.”

John Stevenson, in the following debate, opposed a motion calling for a special conference, saying we had just passed a motion that laid out policy and the organisation needed to deliver on this strategy. John pointed out that such a conference would cut across the union’s democratic and bargaining structures. He warned: “My branch isn’t clear how such a Conference could deliver on the careful planning that creates good strategies and what status any strategies would have.” Conference agreed and threw out the motion. Read more on the UNISON Scotland site…

Homelessness campaign: Every person is entitled to a safe place to live

UNISON is challenging all political parties and interest groups to work together to develop a national strategy to address homelessness, a strategy that will look at the causes, the health perspective and the impact of welfare reforms. The strategy needs to look at housing solutions, including the building of council and other social housing, affordable for the homeless and low income households.

Edinburgh’s Caroline McLean, supporting the motion – and as a first time speaker, said: “It’s frustrating for Housing Officers knowing that the accommodation we require for our vulnerable homeless people is not there, and more frustration when you have to tell them there is no accommodation left. So you need to return tomorrow. This often leads to Housing Officers being verbally abused and threatened.”

Caroline urged us all to get behind the motion and hold the UK Government to account in dealing seriously with homelessness. She said: “Every person is entitled to a safe place to live.” Read more on the UNISON Scotland site…

Conference slammed Universal Credit as “not fit for purpose,” a system which has created misery and poverty for those dependent on benefits. UNISON will campaign along with other organisations to pause its roll out and to reform all the worst aspects of the system.

First time Conference speaker, Edinburgh’s Tara McCarthy condemned the fact that Universal Credit was marketed as incentivising people to work rather than stay on benefits. “As if this is a choice!”, Tara warned. “The evidence is clear. This programme of welfare reform is a wolf in sheep’s clothing, making it more difficult for people to live day-to-day, in often very challenging personal circumstances, never mind get out of the benefit trap and take meaningful control of their lives.” Read more on the UNISON Scotland site…

Upbeat Conference but important 25 year review will have to wait

While our Conference motion wasn’t heard, a motion covering similar issues was passed by Local Government Conference, along with a range of other policies to continue the campaigns on pay, against privatisation, and working for better pensions governance. There was an important motion on social work and refuges. see all the reports on the UNISON Scotland website.

It was an upbeat conference, which recognised that the UK Tory government’s days could be numbered and that a Corbyn led Labour government was waiting in the wings. Unfortunately the man himself could not be with us but we heard a great presentation from Angela Rayner, Shadow Minister for Education and herself a UNISON member and previous convener for the North West region.

It was also an emotional conference as delegates heard of the serious impact of government policies on our members and on our poorest and most vulnerable citizens.

In a moving debate on Grenfell we heard of the real impact of that terrible and most avoidable tragedy on the survivors and the families of the victims. But also on our members working in the council. Dealing day by day with traumatised, grieving people, who they often cannot give answers to. Despite promises it is clear that neither the council nor the Government have made good on pledges to rehouse survivors and many still live in temporary accommodation. Their anger is justified and it is our members in housing, in social work and other services to whom it is expressed.

Our union has been at the forefront of supporting members but also supporting the families and the survivors. This is especially needed as the Inquiry moves forward, and the hope is that this will find answers to how this happened and how to make sure it will never happen again; that this inquiry will place the blame where it needs to go – on austerity cuts by this government; on a council that cared little for the safety of the Grenfell tenants and despite warnings failed to act; on racist policies at every level of government. Conference pledged to continue this support.

There was also an emotional debate on Windrush as delegates condemned May’s “hostile environment” policy – another feature of a racist government, which has failed to bring any humanity to the plight of EU migrants, immigrants, asylum seekers and refugees.

But the Windrush generation have rights to live and work in this country. Many have contributed to this country for more than 50 years. Yet the government has sought to deport them; to deny them their livelihoods, their homes, and medical treatment. It’s shameful and delegates made that very clear.

Again UNISON has been in the vanguard of the fight for our Windrush members’ rights but has also spoken out strongly against the government’s hostile environment policy which is both racist and lacks any compassion.

And even as conference was roundly condemning Israel’s treatment of Palestinian children, Trump was separating children from their parents at the Mexican Border in an act which drew outrage from all over the world.

In an inspiring presentation to Conference, Lorretta Johnson, from the American Federation of Teachers, which also organises in health and social care, slammed Trump’s behaviour, saying to delegates that once again it is ordinary people, union members, leading the fight against such inhumane policies.

She said, “Our fightback and our fight forward will not be easy but if we stand together we will win. Unity and solidarity across nations,” she said, adding that it is time for women to come forward in the union.

To laughter, applause and a standing ovation, Lorretta ended, “If you see me in a fight with a bear, help the bear!”

In a strange turn of events, Conference voted against a wide-ranging composite which would have provided a comprehensive framework for a strategic review of our union in its 25th year. The composite incorporated motions from the National Executive Council, the National Young Members Forum, the National Disabled Members’ Organisation, seven different Regions and five different branches.

Scotland’s amendment called for devolution to be central to the review.

However because if it were passed, it would have meant that a motion on branch funding would fall, delegates threw it out. Ironically that motion was never reached. Edinburgh supported the composite and opposed the branch funding motion and we would have spoken strongly against it if it came up – mainly because it would give money to branches that didn’t need it and leave less to support campaigning branches like ours.

Perhaps the handling of the vote by the platform was an element in the decision of branches. Whatever the reason, it means that there is now no mandate for the review and what would have been a very inclusive, democratic process will now need to wait.