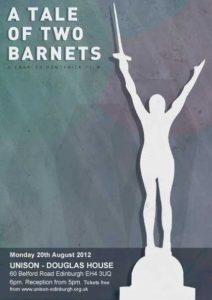 Edinburgh and London UNISON members are bringing an acclaimed film to the city during the festival on 20 August to highlight the dangers of wholesale privatisation of council services.

The film ‘A Tale of Two Barnets’ has received national acclaim. It has had the rare privilege of being shown at the House of Commons and has been warmly received in over 30 showings across the London borough and beyond.

John Stevenson, Edinburgh president of public service union UNISON said: “The film title reflects the fact that the London Borough of Barnet was the site of the infamous workhouse from Dickens’ Oliver Twist. Ironically, 200 years after the author’s birth, Barnet council plans to turn the clock back to those squalid Victorian times by selling off almost every council service.”

“Thankfully, Edinburgh’s own plans to hand over local services to big business were defeated earlier this year. We are now proud to stand with Barnet UNISON, as one capital city standing with another, to back them in protecting their services for the community now and in the future”.

Film maker Charles Honderick spent six months interviewing diverse local Barnet residents, business people and councillors about the challenges they face in 2012 with austerity biting, the Olympics looming and their high street under threat. The film is stark and enlightening.

The film publicity sets the scene: “In 2012, Barnet is faced with the biggest economic crisis since the Second World War. The council, faced with budget pressures has embarked on a massive outsourcing program under the title of “One Barnet”, which removes all democratic accountability, but keeps all the financial risk. They have sought to plug gaps in finances by bringing in a whole raft of parking charges, which threaten the very existence of the local High street.”

John Stevenson added: “Like in Edinburgh, the community is fighting back. Many natural Conservative voters in this Tory stronghold are deeply concerned about the plans and the lack of democracy, as the film shows. They feel they are not being heard. That has led to a wide community campaign and huge election swings this year with the longstanding Greater London Authority member unseated and Labour securing a shock win in a local by election”.

John Burgess, UNISON Barnet Branch Secretary said: “The film makers welcome the chance to show the film in Edinburgh during the iconic festival. We thank Edinburgh UNISON for recognising the importance of the message contained within the film and hope that the experience of campaigners in Barnet can help our brothers and sisters who are under threat across the country.”

“A Tale of Two Barnets” will be shown at 6pm on Monday 20 August at Douglas House, 60 Belford Road, Edinburgh EH4 3UQ. Tickets are free from www.unison-edinburgh.org.uk

On March 19th 2012, three hundred Barnet residents packed into the Iconic Phoenix Cinema in London to watch the world premier screening of “A Tale of Two Barnet”.

The film was directed by American Independent film director Charles Honderick and features local residents, community leaders, the local chief of Police and the Leader and CEO of Barnet Council talking about the issues facing the London Borough of Barnet and its residents.

The filmmaker uses Barnet as a microcosm to expose the challenges being faced in these times of austerity up and down the country. The film is both funny and informative. It shows how a community under threat responds. Residents also talk candidly about parking issues, issues with welfare changes and issues with the effects of public sector outsourcing (in the disguise of the One Barnet program).

The Leader of the Council explains the council’s priorities and the CEO talks about the nature of his job “Staff are my number 2 priority”.

Since the launch of the film, it has been shown over 30 times, including viewings at the House of Commons, The National UNISON Conference and the South East regional TUC conference. Local activists have also arranged dozens of local showings and recruited hundreds of ordinary local residents to the Barnet Alliance for Public Services after debates which followed the screenings.

Campaigners from all across the country have recognised that the film gives a powerful blueprint for raising awareness of issues affecting local communities and the Barnet Experience is one which the groups across the UK can learn from.

The film makers welcome the chance to show the film in Edinburgh during the iconic festival. We thank Edinburgh UNISON for recognising the importance of the message contained within the film and hope that the experience of campaigners in Barnet can help our brothers and sisters who are under threat across the country.