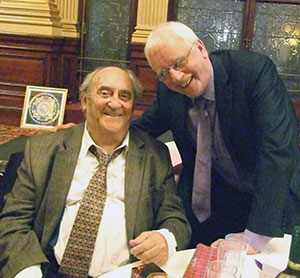 Come and be inspired by Denis Goldberg and many others during Edinburgh World Justice Festival – a fortnight’s programme of events that will inform you, challenge you, encourage you, network you and take you on a walk around scandalous Edinburgh.
Denis Goldberg, who was sentenced at the same time as Nelson Mandela for his part in the struggle against apartheid, will be the keynote speaker at the opening event ‘World Justice and Austerity’ on 12th October, from 11am at the Grassmarket Centre, 86 Candlemaker Row, Edinburgh EH1 2QA.

This will be followed by an exciting programme of events from 12th – 26th October which will introduce you to the ideas and organisations working for a fair and just world. There will be free events on topics as diverse as Burma’s transition to democracy, women and war in Iraq and Afghanistan, scandals in global finance, radical voices, the arms trade and people’s health.
For full details to go www.ewjf.org.uk – you can also find us (and like us!) on facebook and follow on twitter @edworldjustice   See below for more about Denis Goldberg.
About Denis Goldberg

“I’m free to be free. I’m not free. To be free you have to advance the freedom of others and respect it. We’re not there yet.”

Honorary UNISON member Denis Goldberg has become a great comrade, friend and regular visitor to UNISON over the years since we first met as I did some publicity for the setting up of Community HEART – the charity working for health, education and reconstruction training in South Africa, writes John Stevenson.

Born in Cape Town in 1933, he became active in the ANC-led Congress Alliance of South Africa in the 1950s, becoming a technical officer for the underground armed wing, UmKhonto we Swize (Spear of the Nation).

He was jailed in 1964 at the Rivonia trials along with Nelson Mandela. Because he was white, Denis was sent to a separate prison for 22 years. They had been expecting death sentences.

When asked this year whether it was worth it, he said: “Yes. Of course it was. Our people now make laws instead of being excluded by laws.”
Although when asked if he would have done anything differently, he replied: “I wouldn’t have got caught!”

On his release in 1985, Denis joined his family in exile in Britain.
In 2002 he returned to South Africa to become an advisor to the Minister of Water and Forestry before eventually retiring, although, at 80, he still troops around the world to promote his message of justice and equality.

In 2010 UNISON Scotland backed Denis’s book launch at Glasgow City Chambers.
“When I came here (Scotland) after being released from prison, my goodness, it was like being at home, of being enfolded by people wanting to help. Which is why I am here today”, Denis told the Sunday Herald.

Denis’s autobiography The Mission – A life for freedom in South Africa follows his early days in the ANC to being sentenced at the Rivonia Trials in 1964 with comrades which included Nelson Mandela, and Walter Sisulu. He is still referred to by Mandela as the ‘boy’ because he was the youngest of the Rivonia trialists.

Denis then writes of his 22 years in prison and his continuing campaigning for freedom in South Africa on the international stage after his release to exile in London.

He was a spokesperson for the ANC and also represented it at the Anti-Apartheid Committee of the United Nations.

Denis reflects on the close links with UNISON over the years and the with charity he set up in 1995 called ‘Community HEART’ now adminstered by UNISON member Isobel McVicar. As well as books for schools, the development charity also supports a Rape Crisis Centre.
He chronicles his return to South Africa in 2002 as a government adviser in and his ongoing work for freedom causes to the present day.

Denis’s book is an inspiring, humbling and in many ways historic read, cataloging the political and the personal victories, dilemmas and tragedies of a remarkable life of dedication to freedom.
Denis is a joy to be with. An infectious and cheeky sense of humour but also a quiet dignified certainty in his cause.

He told us it took the prison warders ‘years and years and years to respect us’. But with his certainty in the justice of his cause, you knew that he knew they eventually would.
As he told the Sunday Herald, he is not yet free. “I’m free to be free. I’m not free. To be free you have to advance the freedom of others and respect it. We’re not there yet.”