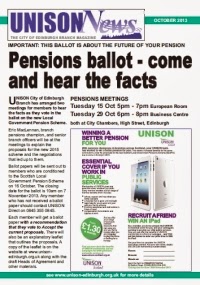 The branch has set up meetings on 15 and 29 October for members to get the facts about the pensions ballot starting on 16 October. UNISON is recommending you accept the new Local Government Pension Scheme proposals.

Eric MacLennan, branch pensions champion, and senior branch officers will be at the meetings to explain the proposals for the new 2015 scheme and the negotiations that led up to them.

Ballot papers will be sent out to members who are conditioned to the Scottish Local Government Pension Scheme on 16 October. The closing date for the ballot is 10am on 7 November 2013. Any member who has not received a ballot paper should contact UNISON Direct on 0845 355 0845.

Each member will get a ballot paper with a recommendation that they vote to Accept the current proposals. There will also be an explanatory leaflet that outlines the proposals. A copy of the leaflet is on the website at www.unison-edinburgh.org.uk along with the draft Heads of Agreement and other materials.