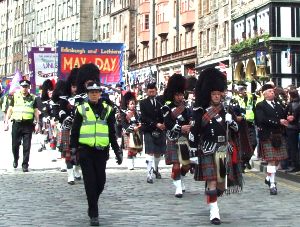 UNISON urges new council to work together against cuts.

“And just when we think we’re hitting a brick wall, let’s remind ourselves. We won in the privatisation fight in Edinburgh. We won in Aberdeen. We’ve turned the tide in Southampton. We’re fighting on in Barnet and councils across the country. We’ve got a taste of victory and its tastes good. Let’s do it again!”

The rally came the day after Labour had won most seats on the council and was already in talks about the future governance of the city. John told them, “Councillors should not be passive administrators of cuts decided at Westminster or Holyrood but champions of their areas, their authorities and the services we rely on. They should be in the forefront of making ‘austerity’ unworkable – campaigning to protect services with those who use them and those who deliver them.”

Urging them to fight for the alternative to cuts, he said, “Recession is not an accident. It is not unavoidable. It is created by the politics of greed.”

The rally heard from Greg Philo, research director of Glasgow University Media Unit, on “Where all the money went” as he took the rally through the evidence that a one-off walth tax could pay off the national debt on one fell swoop. The Wealth Tax proposes a one-off tax of 20% on the wealthiest 10% of the population in the UK. This would pay off the national debt and avoid the need for deep and harmful cuts in education, welfare and public services.

Kim Grant from Occupy Edinburgh called for unity between campaigning groups to fight for the alternative.

There were messages from Mark Serwotka of the PCS rallying suppport for pensions action by his members this month and a meesage from Palestinian trade unions.