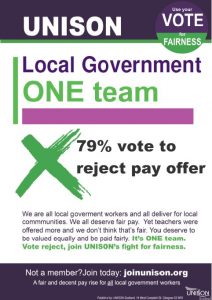 UPDATE: Local government branches will meet on 30 November to plan the next steps:

UNISON Scotland’s local government members have overwhelmingly voted to reject their employer’s pay offer (CoSLA) of 3% for workers earning up to £80,000, and to move towards strike action in support of their claim for fair pay.

UNISON will start to take steps towards strike action. The local government joint trade unions – who have also run consultative ballots of their members – will be meet with CoSLA to inform them of the results of their ballots, tomorrow Friday 9th November.

Mark Ferguson, chair of UNISON Scotland local government committee said: “UNISON members have overwhelmingly rejected the 3% pay offer. They do not think it is fair that the Scottish government found £38m extra to put into teachers’ pay, over and above their cost of living increase, but they have offered no additional money for low paid local government workers. UNISON will now meet other local government trade unions and employers tomorrow. If UNISON and other unions decide to move towards strike action the next step will be to hold a statutory industrial action ballot.”

Notes:
• UNISON is the largest trade union in local government, the public services trade union and the largest trade union in the UK
• This was a consultative ballot. 79% voted to reject the offer. 67% voted to take industrial action, up to and including strike action in pursuit of the Joint Trade Unions pay claim.
• Voting in the local government consultative ballot closed 5pm, 7 November .
• Local government workers have endured a decade austerity with job cuts, and a decade of real-terms pay cuts. A decade of austerity has led to staffing shortages in key areas of local government like social care and school staff.
• The final offer from the employers (CoSLA), after months of campaigning and negotiations, is 3% for one year for workers earning up to £80,000. Despite assurances from CoSLA about parity and fairness across all local government workers, the Scottish government found an extra £38m for teachers – meaning some teachers could get up to 10% pay rises, while the teaching assistants working alongside them would get 3%.
• The offer to UNISON members is below the current rate of inflation and does not address or improve low pay.
• This is a consultative ballot, if we want to move towards industrial action we would need to would hold a statutory ballot – to meet the trade union legislation. This is one of the issues under discussion at committee.

Click here for all the details about the claim, the offer and the campaign on the UNISON Scotland site