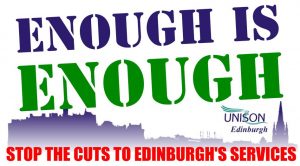 The trade unions have serious concerns about the negative impact of all previous cuts and the further negative impact this years cuts are likely to have. More Jobs lost, services provision reduced or lost, funding to the third sector and the EIJB cut.

These continuous cuts have had, and will continue to have negative consequences for our most vulnerable children, young people and families, the elderly, the disabled and all who reside in the areas of greatest deprivation in our city. 850 vulnerable people sitting at home without social care provision is something that this city has to be ashamed of, is this the BOLD, is this transformational, is this efficient, is this what it means to be lean and agile? is this what Change looks like?

Your staff are continuously being asked to do more with less.

Our members have and always will work hard to deliver the vital services they provide to the public. However, your staff and the services they deliver at are breaking point.

Staff have found themselves overstretched and unable to access the resources that they need to carry out their work safely. Services are becoming too thin and too fragile.

Our most vulnerable and disadvantaged children and families and other underprivileged groups are regularly experiencing the destruction of the services that they need, relay and depend on. How does this sit with the council pledge and Scottish governments position, to give every child a good start in life and to reduce poverty, inequality, and deprivation?

Your budget gives no indication of Equality and gender Impact assessments being carried out or how these have affected the recommendations in front of you or the decisions that you may ultimately make.

I have said before, and will say again; there is a real risk that this local authority is not fully meeting its Public Service Equality Duty.

The most disadvantaged and most vulnerable tend not to be consulted at all. This leads to poor judgements leaving the least powerful and vulnerable individuals and communities being disproportionately disadvantaged.

The council has encouraged trade union members and city residents to participate in completing their Budget Calculator. This is a very cynical method to inform decision making. The returns are very low and some of those who complete the task may have little understanding of statutory services or the role and function of local government.

We also now see the construction of an activity that staff are being invited to participate in. This activity plays staff and services off against each other and cynically gives the employer some bizarre ability to say that the staff had been consulted.

Those who have a greater knowledge and understanding, and may oppose the cuts, have no capacity through either activity to challenge the status quo and say no to cuts.

Management and elected representatives use the returns to claim that their employees and the public decided what should be cut.  This is a negation of senior management and the elected member’s responsibilities.

There is no capacity to challenge the current austerity agenda/paradigm but only the capacity to work on the belief that cuts to jobs and services are inevitable. What is needed is a huge paradigm shift and investment in public services.

All services provided by the council will be vital to someone.

Council services have been played about with like some giant game of Jenga. Bit by bit the pieces get removed, eventually the structure begins to rock and sway and you hope that you are not the one that removes the block that topples the structure.

Is this where we are now with local government services? What is the next thing to go before you find that the structure you had is no longer? Is that this year, next year or the year after, in some places it is now?

The trade unions will resist, further cuts and any attempt to outsource services.

We will not accept attacks on our members terms and conditions.

We will work alongside, and provide resources where and when necessary to the citizens of Edinburgh through their community groups in the campaign to protect the services they use and need.

Those who work in the public service are more than aware of what is needed to provide meaningful, dedicated and professional public services.

It was not Public service workers or the public they serve who caused the problem in the economy but the large financial institutions. Their failures resulted in a massive bailout and the retention of their huge salaries and bonuses.

Public services on the other hand are being cut to the bone. The staff employed in the service have endured years of pay freezes’ resulting in a drop in their living standards.

The redundancy costs and knock-on effects on employment, growth and tax revenue will make the situation worse.

On average, every redundancy creates £29,400 in additional costs to the public sector as well as undermining morale and productivity.

Most of the cost of employing a public service worker is recouped by the state through increased tax revenues and reduced benefit payments.

Economic research shows that for every pound spent on local public services, 64pence is re-spent in local economies, supporting jobs and businesses.

The Westminster block grant has reduced by over 1.8%, but we have seen a real cut of over 7.1% in the funding that the Scottish government has provided to local authorities.

This directly impact the capacity of local government to provide credible services. You will cut a further 300 jobs in the coming year, this is on top of the 1000 that have already gone. There have been over 50,000 jobs lost across Scotland since the financial crash.

The cabinet secretary Derek McKay is clearly out of touch with the situation affecting local government. He needs to allocate some of the Scottish governments nearly £500million underspend thus enabling them to provide the services that people need.

I would call on the SNP representatives in this chamber to hold him to account and the capital coalition to take a stance.

The silent slaughter of Local Government needs to stop. It is time to clearly say, ‘enough is enough’.

The trade unions will continue to engage in meaningful dialogue with the administration and council officers. However, it will remain the case that we will not participate in a manner that encourages cuts to public services or undermines or diminishes the terms and conditions of our members.