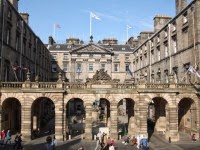 Unions representing workers at the City of Edinburgh Council are today urging councillors to resist plans to abandon a scheme that allows staff to prepare for retirement. The scheme allows paid days off in the last year of work but the council now want to heap the cost on to employees. This could cost a cleaner £3,000 in their last year before retirement.

UNISON’s Tom Connolly, speaking for the joint unions, said: “A positive change in legislation is being used as an excuse by the council management team to attempt to hive off the cost of the transition into retirement entirely onto employees.”

He slammed an HQ bias which ignores the “psychological, emotional, social and other issues facing thousands of low paid Council staff – staff who have often spent decades looking after and caring for the most vulnerable children, young people elderly and disabled members of the community, we also have the manual workers who ensure our environment is kept clean and our public parks and gardens are well kept, all the above tending to be seen as low status, often physically demanding work.”

“Some of the lowest paid staff in the country. Out in all weathers providing services to the public, home care, refuse, residential child care. These staff give years to the public sector reserving very little in return. Working above and beyond their contracted hours. The council management team is out of touch with the grass route staff.”

And when it comes to cost, the council is ignoring the millions it saves by staff who regularly work ‘above and beyond’ in unpaid overtime to keep services going. TUC figures show that more than a quarter (27.4 per cent) of public sector staff did unpaid overtime of almost eight hours a week in 2013.

The full text of the submission being made today by Tom Connolly follows:

“The trade unions welcome age diversity in the workplace. We also welcome the associated legislative changes that, until 2011, barred those over 65 from invoking the relevant aspects of the Equalities Act to combat any move by an employer to enforce retirement purely on the grounds that they are over 65.

We also acknowledged that the Employment Equality (Repeal of Retirement Age Provisions) Regulations 2011 has changed how the Council must now deal with retirement in the future. However, having looked through the new draft policy and compared it with the current interim policy we draw one, stark, conclusion:

A positive change in legislation is being used as an excuse by People and Organisation and CMT to attempt to hive off the cost of the transition into retirement entirely onto employees.

Currently, for employees aged 64-65 the Council allows employees to wind down using pre-retirement (PR) days without any loss of pay. This does have an associated financial cost which, in the worst case scenario
outlined in the paper presented to committee, seems to cost less than 0.1% of the annual budget.

We question and challenge the accuracy of the figures presented in the appendix to this paper. However even on what seem to be the inflated figures outlined in the committee papers, the actual costs to the Council of PR days seems to us marginal.

By contrast the new draft policy demands employees to agree a minimum 20% reduction in salary to be considered for Flexible Retirement.

Rough calculations show what the figure of 20% will mean for just some of our members in reality:

A cursory glance at these figures, when totalled up, show that they roughly mirror the £730k outlined in paragraph 3.9 of the committee papers.

Making the assumptions that P&O have, leads us to conclude;

That these proposals are nothing short of an attempt to hive off the cost of pre-retirement arrangements onto individual employees.

Based on these assumptions the Council would no longer hypothetically pay “£730K” for PR days. In addition the resulting “saving” of a minimum of 20% per employee will mean that the total would, hypothetically, be nearer £1.5 million per annum.

Many of our members see that the corporate side of the Council has come to suffer from what we shall term Waverley Court Bias. The psychological, emotional, social and other issues facing thousands of low paid Council staff – staff whom have often spent decades looking after and caring for the most vulnerable children, young people elderly and disabled members of the community, we also have the manual workers who ensure our environment is kept clean and our public parks and gardens are well kept, all the above tending to be seen as low status, often physically demanding work.

In addition it is important to note that a reduction of a minimum of 20% of salary for those who earn less than £20K per annum is arguably likely to be far more financially problematic than it would be for the 400 or so managers in the Council who earn over £50K per annum.

Whether or not there is any truth in the assertion that there is a Waverley Court Bias there are some stark differences in the demands of different workplaces. For example:

Consider the home carer, cleaner, refuse collector starting work at 6am five days per week working split shifts, and in all weather conditions. Many staff have done work like this or other work with similar levels of physical demand for decades.

The new draft Retirement Policy, it seems, better suits the work situation of the people who have written and approved it than it does many thousands of others it will adversely affect, should it come into force.

Lastly, that essentially the Council have a veto on any offer of flexible retirement with no right of appeal is simply not acceptable, given the complexities and sensitivities associated with the transition into retirement.

We know how our members’ prize the PR Days and we intend to defend them in ever way we can.

It was not the local government workers who were the cause financial crisis, but once again we see another attack on them. we have seen a great reduction in pay levels over the years and a continues attack on our terms and conditions.

The trade unions today make it clear that enough is enough if today we are issued with notification by the Council of intent to withdraw from the current Local Collective Agreement and impose the draft policy
tabled to the Corporate Policy and Strategy Committee we will immediately begin consultation with our membership on what, if any action, they are prepared to take in defence of current arrangements.

We question the figures outlined in the paper, are accurate enough for the members of the Corporate Policy and Strategy Committee to make a clear decision about.

In this appendix we raise our criticisms of the figures outlined.

“The current policy is seen as a benefit to staff by the trade union side and they do not support it being stood down. The cost of the policy as it currently applies – i.e. only for those aged between 64 and 65 – is significant as all staff that are eligible take it up. For example, if all staff who reach their 64th birthday between 1 June 2014 and 31 December 2014 opted to reduce their hours in accordance with the policy, the financial cost to the Council of the hours lost would be approximately £730k.”

Immediately following the figure of £730K is a table supposedly breaking down the costs by department.

In relation to para 3.9 we have the following questions to ask and points to make:

Do these figure include abatement of annual leave? When a member of staff applies for and takes PR days their annual leave entitlement is abated to reflect the reduction of hours. This would lower the cost further.

Nothing is mentioned about the actual number of those who are currently between 64 and 65 who currently take PR days. Instead a maximum possible figure is presented, which is neither objective nor representative of the current situation. What is the actual figure? No figures whatsoever are presented on the number of employees who are currently over the age of 65 and who haven’t taken PR days.

“In order to retain the policy, arguably, it would also have to be extended to all staff aged 60 and above who intended to retire within the next 12 months, to conform to age discrimination legislation. Age 60 is the earliest employees can retire of their own volition. Further,
when the Council approves early retirement for employees aged 55 and over, arguably they should also have access to the policy to conform to equalities legislation. … if all staff over 60 opted to reduce their hours in line with the policy, the cost to the Council would be approximately £9.8million.”

In relation to para 3.10 we have the following questions to ask and points to make:

In terms of who could be offered PR days and at what age remains undecided. This paper seems to assume the risk that there might be an argument for those 60 or over or indeed for those over 55 that have been granted flexible retirement. Can we really be sure that this is the case
beyond all doubt? Again there is an assumption that all staff over 60 could potentially demand PR days. By any brief objective analysis any assertion that this could become a reality does not seem credible, even if in theory it was applicable. The date people can claim the state pension from has risen to 67 years and 3 months. To retire early and take their LPF pension early will simply not financially possible for many. No objective analysis has been done about the likelihood of take up of PR days for those over 60.

Instead the very worst case scenario has been illustrated: That the Council will somehow be in the position that 10% of its workforce will all suddenly want to take PR days at a cost of £10 million pounds. Any assertion that this would come about seems, to us, to also lack any basic credibility.