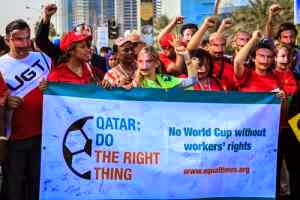 Qatar’s Kafala system that removes workers’ human rights is cited by UNISON as a reason for the Lord Provost to decline an invitation to visit the country.

Branch International Officer Chris Goodsell is making this submission to the council today:

“Recently I had a potential opportunity to live and work in Qatar. As with any opportunity of this sort it is very important to research the location to the best of your ability.

Early on in my research I became concerned about how the visa system works, and how that would affect my wife and I. The Kafala or sponsorship system in Qatar meant that a single person within the company that I would work for would have the soul say as to whether I could exit the country at any given time.

This made me a little uncomfortable and became something that I wanted to find out more about.

The Kafala system is technically not a law rather a tradition which is tied in closely with immigration laws and labour laws.

Although it is unlikely to have a huge effect on the well paid Western worker, its effect on the majority of migrant workers in manual occupations is huge. It can be and often is, applied in a way that is unfair and in many cases cruel and harmful.

In many cases workers have found their selves running away from a job where they have been cruelly treated. In these cases they are not legally able to find another job or to go home to their own countries. Many such cases, particularly concerning migrant domestic workers are highlighted in the
Amnesty International report “my sleep is my break”.

Much has been written about the rights and wrongs of holding the 2022 world cup in Qatar the greatest wrong in my mind is the cost in human life.

Most of the construction workers for the stadium projects in Qatar are migrant workers as are 94% of the population of Qatar. These workers mostly originating from Nepal and India are amongst the most poorly treated in the country.

Workers are often accommodated 10 or more to a small room with inadequate cooking and hygiene facilities. On site they are likely to work more than 10 hours a day for 6 or 7 days per week. This can be in temperatures exceeding 50c. There have also been cases reported of workers being denied access to free drinking water while at work.

Given these conditions it is not surprising that the death toll is rising, rising at a rate equivalent to a death per day. So far more than 1200 lives have been lost on these construction sites, often due to exhaustion or heart attack bought on by the conditions that these people are working in.

Again because of the power of the kafala system and the way that it makes virtual slaves of the work force there have been many incidences recorded where workers are paid far less than they have been told they will be paid, and then pay will be very infrequent. There have been cases where no pay has been received for a year.

The Lord Provost has been invited to visit Qatar at the invitation of Akar Al Baker the Chief Executive Officer of Qatar Airways. Qatar Airways has its self been subject to some controversy due to its treatment of cabin staff. It has emerged that its female cabin staff are pretty much confined to their designated accommodation by means of curfew and are highly monitored as to their whereabouts. It has also emerged that they have to ask the employers permission to marry and are likely to face dismissal should they become pregnant.

Although these abuses may not seem the worst that may be encountered they most surely are an infringement on the human rights of the individual and indicate the disregard human rights receive throughout Qatar society.

I have already mentioned the plight of many of Qatar’s domestic workers and I have just mentioned the consequence to cabin staff should they fall pregnant.

The consequence of pregnancy is far worse for the majority of migrant domestic workers, most of whom are single.

Although it would be unfair to suggest that all Qatari employers are bad employers, the fact remains that there are many incidents recorded where serious abuse takes place. This often includes rape and other terrible physical and mental attacks. In the case of rape, it is very difficult for the victim to report this as to do so could end with the victim being jailed for having sex out with a marriage.

Particularly harrowing are the cases where this has resulted in pregnancy. In these cases the child is imprisoned with the mother for up to two years.

Qatari labour laws have been highly criticised by organisations such as The United Nations, the International trade union Confederation and Amnesty International.

It is illegal for any foreign worker within Qatar to join a trade union or organise against unfair treatment.

On this basis we would request that the Lord Provosts invitation to visit Qatar be declined.”