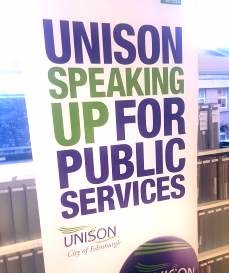 UNISON response to Edinburgh budget proposals: The prospect of £140m of cuts over the next five years, added to the £240m cuts already, is another slap in the face to essential local public services.

30,000 jobs have gone from local government in the last 10 years. Nine out of ten austerity job cuts have been visited on local services.

The jobs go but the need for services doesn’t. The result is that those left behind face impossible expectations, more and more stress and increasing anger from the public.

It is barely believable that a Scottish Government talks about opposing austerity when it imposes it year after year on to council services. This has to stop. They have the powers to mitigate these cuts and they must now use them.

With Health & Social Care in Edinburgh struggling to match increasing need, the £9 million budget pressure is no surprise. How can they be expected to respond to growing need at the same time as facing cut after cut?

Despite the promise of a ‘living wage’, pay and conditions in the commissioned care services remain poor – the result is a recruitment crisis.

As we said in a response last month: “The difficulties facing social care in Edinburgh are a result of years of under-funding and focusing on short-term fixes for delayed discharges. We need good preventative services, more community rehabilitation services, and recognition that quality services provided by a well-trained, consistent workforce cannot be achieved on the cheap. If we want our most vulnerable citizens to be treated as well as they deserve, the Scottish Government and the council have to face facts: good care costs money.

“UNISON City of Edinburgh calls on the Council and the Scottish Government to fully fund social care services to a level which allows care provision to be brought back in-house, where recruitment and retention problems are minimal and quality of service can be monitored more effectively. We also call on the public to demand that our care services are shown the same respect and investment as our health services.”

Of course, the need can’t be ignored so something else inevitably has to go. Other services face even deeper cuts and staff face more and more pressures.

The council will soon start consulting the unions. Be assured that UNISON will not enter this process to discuss where the cuts should be made. We will be standing up for public services and demanding that the council and the Scottish Government does the same.

The public will also be consulted. But in effect, they will only be asked where the cuts should be made. They won’t get the chance to say ‘no cuts’.

UNISON will join with them to give them that say.