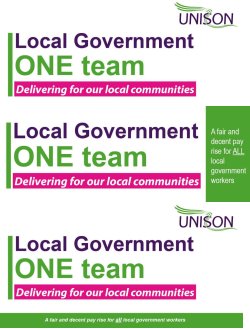 UNISON will recommend that its local government members reject the latest revised pay offer from COSLA when it holds a consultative ballot of members in the next few weeks.

The final revised pay offer was made yesterday (6 September) by COSLA offering a 3% pay increase for all local government workers earning up to £80,000. However after eight months of campaigning and talks by UNISON, the union will recommend rejection.

Carol Ball, vice chair of UNISON local government committee said: “UNISON has worked hard to get where we are, but this revised offer does very little for the lowest paid workers like care workers and support for learning assistants.

“These workers rightly feel they have taken the brunt of austerity over the last 10 years, with pay cuts and job losses. UNISON will continue to campaign on their behalf. A decade of pay cuts has left local government workers very angry. In the end our members make the decision and we will be balloting them to ask what they want to do.

“UNISON campaigns have made real progress. It is only through our action that we have seen the end to the public sector pay cap, we have got more money on the table from employers, and the employers have agreed that all local government workers should be treated equally. UNISON will continue the campaign for all our local government members, especially those on the lowest pay.”