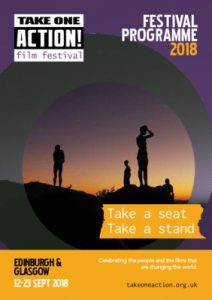 Take One Action, which is supported by UNISON Scotland, enables thousands of audience members each year to experience cinema with a difference, to engage actively with campaigners, artists, filmmakers, journalists, politicians and each other – and to take action themselves.

This is the eleventh annual festival and it will host 45 events this autumn, including two European and three UK premieres.

More than 60% of features screened are directed or co-directed by women, reflecting the festival’s continued commitment to championing female voices

The 2018 programme has full details for all films being shown in Edinburgh and Glasgow from 12-23 September. The Festival then heads for Aberdeen (16-18 November) and Inverness (23-25 November).

UNISON Scotland is delighted to be able to offer an exclusive discount to all members who are attending films in Edinburgh or Glasgow.  UNISON members can book their tickets for just £5.50 on production of their UNISON membership card at GFT (Glasgow) and Filmhouse (Edinburgh), and can book the concession rate for any CCA (Glasgow) screening via the Take One Action website. Please note bookings at the GFT and Filmhouse must be made in person at the Box Office.

UNISON is supporting four of the film screenings

The Green Lie  (Louise Giblin, representing our International Committee, will be speaking in the discussion afterwards on both nights)

There is a special discussion event on Monday 17 September at 7pm in Edinburgh, where Louise Giblin will also be speaking. The Green Lie: How to challenge corporate greenwashing. Info here:

Strike a Rock (Lynn Williamson, representing our International Committee, will be speaking in the discussion afterwards)

South Africa: After the massacre of 34 striking mineworkers shakes their poverty-stricken community, two grandmothers lead their community in a historic fight for justice.

Naila and the Uprising (We are supporting this event and Sofiah MacLeod, of the Scottish Palestine Solidarity Campaign will be speaking in the discussion afterwards, which features the film’s main protagonist, Naila Ayesh, founder and director of the Women’s Affair Centre in Gaza. Naila Ayesh will also speak at the Edinburgh screening on 23 September, which closes the festival.)

Palestine: Recontextualising a revolution: a unique opportunity to re-appraise the history of nonviolent resistance in Palestine from a feminist perspective.