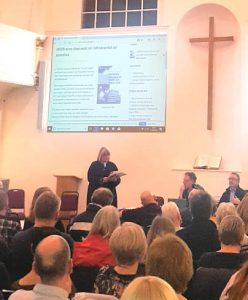 The recall AGM on 13 March 2018 went ahead and many thanks to all who attended and made it quorate and such a lively meeting.

In the one election, Tom Muir was successful in the Vice-Chair post. All of the rule changes were passed (No 4 as amended) and all of the policy motions were heard and approved.

Unfortunately an update on pupil support staff was missed but officers met the members after the meeting and set up a plan of action with them.

Thanks to Lyndsay Nolan for this great piece that gives a flavour of the evening:

“Tonight’s UNISON AGM was an eye opening experience hearing our sisters and brothers discussing the hardship they are facing daily. I was extremely angered to hear of the Edinburgh Council’s ‘staff-less’ proposals for our libraries and community centres, so they can be kept open but will have no staff, I think I’ve heard it all now and am extremely happy knowing UNISON is fighting this ridiculous proposal! As Duncan Smith said “Its human cost to the cuts and we can’t let our councillors forget that!”

John Stevenson Branch President said that “UNISON exposed that 9/10 austerity jobs cut were in local government, with 28,000 gone in the last 7 years”.

Duncan Smith Chairperson told how “Our branch has been successful in preventing compulsory redundancies”.

Tom Connolly Branch Secretary explained that “Staff who provide essential services to the public need to be treated with more dignity and respect”.

Gerry Stovin Service Conditions Officer “The janitors’ dispute is a prime example were 95% have voted to reject the changes that would badly affect their pay, conditions and service”.

Click here for full details of the motions, rule changes and annual report.